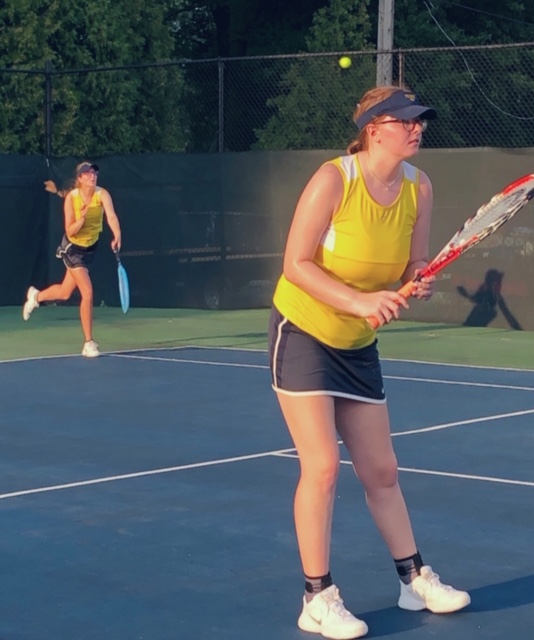 The girl’s varsity tennis team suffered their first loss of the season in close conference match against Westlake.

The first doubles team of Kate Barrett and Nicole Gaal had to retired due to an injury sustained during the match by Gaal.

The lady netters got their first win of the day as Morgan Truscott remained undefeated at first singles with solid win and a match score of 6-1, 6-2.

Emma Kassouf at third singles and Ellie Goetz at second singles did their best, but both had losses of 6-0, 6-1.

The final match on the courts was the first doubles team of Emma Barnard and Sammie Gaba. After losing the first set and trailing in the second, they started to make their amazing comeback after being down 4 games. They took the set to a tiebreaker and won the second set 7-6 (7-4) . It was now up to a third set, 10 point tie-breaker to decide the match. The Bulldogs came out very strong and lead the tie-breaker from the start. Not once did they lose their focus and determination. They hit their hardest serves and rallied their best shots to go on and win the tie-breaker (10-8) and the match at first doubles 3-6, 7-6, 10-8. It was an exciting match and a well-deserved win for the doubles team. Barnard and Gaba remain undefeated at first doubles this season.

The team is 4-1 in the Southwestern conference and 6-1 this season overall.

The varsity team travels to Avon and Avon Lake this week and will have their conference tournament back at Avon Lake the following week. Stop by the courts and cheer on the team!