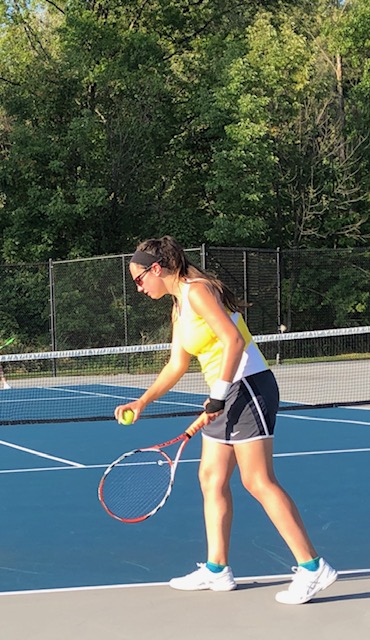 The girl’s tennis team came out swinging and had a great start to the SWC Varsity Tennis Tournament at Avon Lake today.

Singles action was at Avon Lake and the Bulldogs got wins at all three singles positions.
Ellie Goetz, seeded fourth at second singles, defeated North Ridgeville 6-2,6-3. Up next was Gabby Gosciewski at first singles. The three year letterman, was 1-1 on the day with a strong 8-2 win to end her day. Her final match of the tournament will be this Saturday. Goetz will have two matches on Saturday.

Freshman, Morgan Truscott, playing at third singles and seeded number one, took very little time to beat her opponent from Berea-Midpark 6-0, 6-0. She was strong and consistent and as always, gave it her all. Truscott will also have two matches on Saturday as she heads into the finals

First doubles, Sam Gaba and Emma Barnard, avenged a loss to Midview from earlier in the season with an impressive 6-0, 6-2 win today. The Bulldogs were spot on and had a great first match. They will have two more matches as they head into the medal round on Saturday.

The second doubles team of Ally Leither and Kate Barrett, lost a heart-breaker with a third set tiebreaker loss that decided their match. The team faced North Olmsted and dropped the first set 4-6, but came roaring back into the second and won, 6-4. They played tough in the tiebreaker and had three match points and also fought off four match points against them before falling 15-13 in the tiebreaker. The duo will play two more matches on Saturday and will surely have this great match experience to carry them into the final rounds.
Come cheer on the team at Avon Lake on Saturday beginning at 9am. The singles matches will be at the high school courts and the doubles matches will be at Bleser Park just up the road. Go Bulldogs!!!