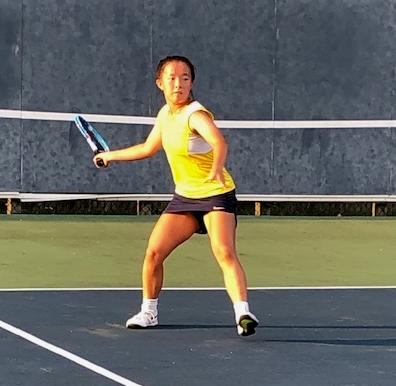 The girls varsity tennis team defeated North Ridgeville in a solid 5-0 win at home on Tuesday. The opposing team only won a single game off the lady netters in all matches.

Second doubles was first off the courts as co-captain, Kate Barrett and teammate, Nicole Gaal got the win 6-0, 6-0.

The second doubles team also earned a win as co-captain Emma Barnard and junior Sammie Gaba took their court with a 6-0, 6-1 win.

The team heads to North Olmsted on Wednesday for their next conference varsity match. The team is 5-0 overall and 4-0 in the SWC.

****The Bulldogs JV team also picked up a win against North Ridgeville with a 5-0 win. Their opponent was short both doubles teams, but was able to field three singles matches. Nora Barnard won at first singles. 8-1. Megan Nguyen won her second singles match 8-0 and Luisa Vallejo won at third singles with a 8-1 match score.

Congratulations to both Bulldog tennis teams!