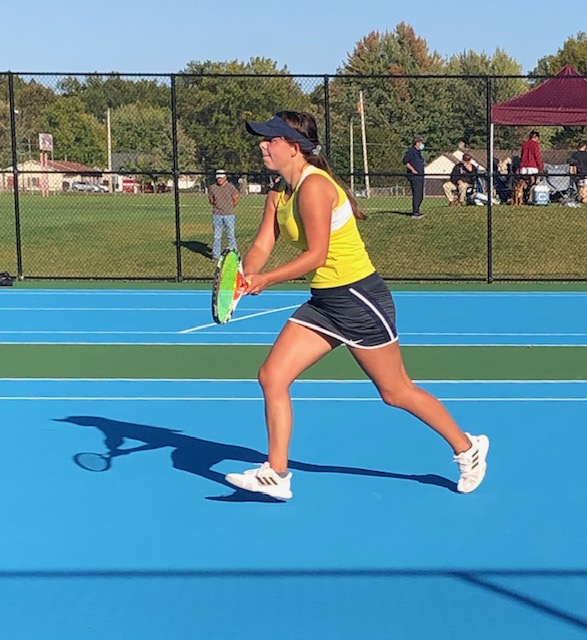 The Lady Bulldogs had an impressive day one at the Elyria Division 1 girl’s tennis sectional. The Elyria sectional is one of the toughest in Northeast Ohio with several teams in the top 20 in the state, participating in this tournament. They all have one goal and that is to advance to the district tournament next week. The tournament will continue up to the quarterfinals on Thursday and conclude with the finals on Saturday.

Sophomore, Morgan Truscott will return to play in the quarterfinals on Thursday, at 3:30pm. Truscott had a bye in the first round. She earned a perfect score of 6-0, 6-0 in her second round match and followed up with a 6-1, 6-4 win in round three. It was strong play across the board for Truscott. She lead in all her matches and played with exceptional skill and focus. Truscott is determined and will be a force, no doubt as she heads to the courts tomorrow to take on her next opponent.

Senior, Ellie Goetz had one of her strongest days on the courts with wins in the first and second rounds. Goetz defeated Amherst 6-1, 6-1 and then went on to a big win against Westlake with a third set tie-breaker in round two. Goetz lost the first set and refocused and won the second set, 6-3. She sealed the win with an impressive 10-7 win in the tie-breaker. It was a tough Strongsville opponent that ended the co-captain’s run for the day. Goetz gave it her all and played tough from the start. She had remarkable shot placement throughout the match and moved her opponent from corner to corner. It was a memorable and impressive way for the four year varsity starter to end her years on the girl’s tennis team.

The doubles duo of senior, Emma Barnard and junior, Sammie Gaba advanced to the second round after a straight set win against North Olmsted. The team played well and lead the entire match. Barnard and Gaba took turns hitting winners at the net and from the baseline and kept their opponents on the run with every game. The final match score was 6-1, 6-2. Next up was a tough team from Avon Lake. The Bulldogs rallied and gave it their all right up to the last game, but lost 6-1, 6-3 in their final match of the day. Barnard and Gaba have played doubles together the last three years on the team.

Our second doubles team of senior co-captain, Kate Barrett and freshman, Nora Barnard and also, Emma Kassouf at third singles, had tough first round losses to Avon and Avon Lake. All played very well and with determination against their opponents. It was good tennis all around for the teams and terrific efforts against some very seasoned conference opponents.

Congratulations to all the Lady Bulldogs for their great matches at the sectional tournament! We wish them well with day two as Morgan Trustcott takes on St.Joseph’s in the quarterfinals