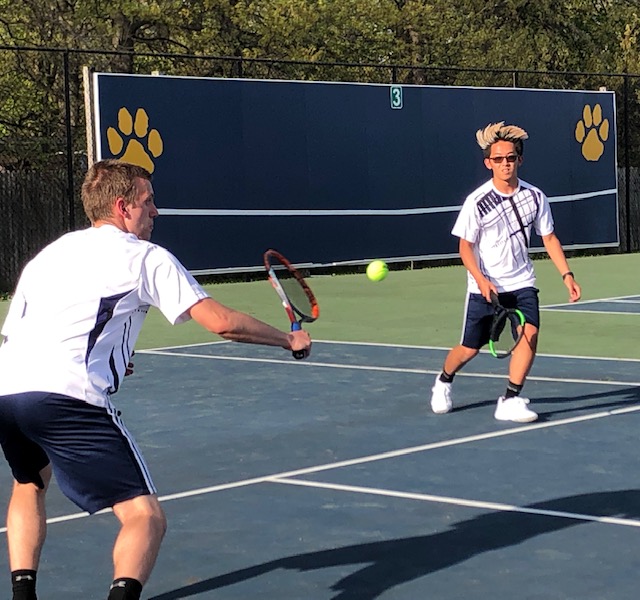 Arjun Arumugam at first singles and Brady Chapman at second singles each posted a perfect double bagel win with match scores of 6-0. 6-0 each It was swift and efficient on courts one and two as the teammates were the first to wrap up their matches within minutes of each other.

Drew Campbell scored another strong win at third singles with his 6-1, 6-2 win. It was good shot making and pace that gave the freshman his fifth conference win of the season.

Jon Hubeny and Nick Thompson had many long rallies in their 6-2, 6-2 win at second doubles. The duo covered a lot of court and worked great as a team to take down their opponents for the win.

First doubles earned a big win on court four and bring their season record to 8-1. It was a great way to end the day for co-captains Evan Toth and Adam Kwan as they were recognized earlier for senior day with their parents. The first doubles pair had tough opponents that loved to cover the net. The Bulldogs stayed the course and kept with their winning strategy and won the match in straight sets.

The Bulldogs celebrated and recognized their three outstanding seniors today with their parents, prior to the start of the match. Adam Kwan, Evan Toth and Sherif Nagiub are the seniors for this year’s teams. All three student athletes have been on the team for four years. Toth is a four time letterman, Kwan is making his first letter this year and Nagiub has lead the jv team. We wish them all the best in their final season as Bulldogs on the tennis team and all the best in their futures.