The boys varsity tennis team put their Bulldog bite into the SWC as they racked up 17 points with one more day left in the conference tournament. Four out of the five positions advanced to the medal rounds. Two teams remain in the draw and are in the finals next week.
Senior co-captains Evan Toth and Adam Kwan at first doubles, defeated Avon Lake in the first round and Westlake in their second round. They won both matches in straight sets. They will face Avon in the finals. Both Toth and Kwan were on fire with their serves and that set the tone for their exciting wins today.
Freshman, Drew Campbell is in the finals at thirds singles. He defeated North Ridgeville in his first round. In his next match he faced top seeded, Avon and won the first set. He fell behind 0-3 before roaring back to win the set 6-4 and the match.
Brady Chapman defeated North Olmsted in the first round to earn a first time medal for 4th place today. Chapman played strong at second singles, where the competition is very tough this season. He took on strong opponents throughout the day and helped to earn points for the team tournament.
Arjun Arumugam scored a first time medal at first singles and placed fourth in the tournament. Arumugam has done a great job all season facing the top athletes in the area at the first singles position. Arumugam had to retire from the tournament after the first round due to an injury, but his first round win brought much needed points to the team for the SWC tournament.
At second doubles, Nick Thompson and Jon Hubeny won the back draw after a tough first round loss to Avon Lake. The determined team bounced back 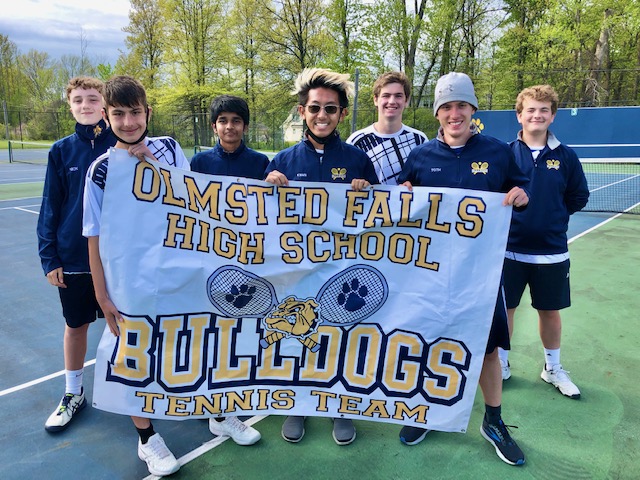 and won their next two matches to seal up the back draw and earn fifth place for the tournament.
Congratulations to the entire Bulldog Team and good luck in the finals next week!
The final are scheduled to be held Monday at Avon Lake at 4:00pm. Tuesday at 4:00pm is the rain date.
May
10