Monday May, 16th was the kick off of the first annual OF Tennis Invitational.The boy’s tennis team concluded their season with spirited competition between coaches, teachers and members of the boy’s team. Everyone took turns paired with different partners in doubles play. In the end it was a three way tie between Zach Buchta, Joe Bertrand and Marco Grgurevic. These three “aced” the competition!

In the wrap up, everyone moved on to play in a singles competition and it was Mr. Zrenner who took home the crown of “King of the Court.”  Zrenner was a varsity tennis athlete during his days at Olmsted Falls and he without a doubt did not lose his skills from his high school tennis days. Mrs.  Budd, Mr. Blake, Mr Godfray and Miss Byndas also got in some great shots!

Coach Graham and Coach Kehl would like to thank everyone who participated in this fun event. A special thank you to Mrs. Schafer for stopping by to show her support. It was a great way to mark the end to an awesome season by the boy’s 2016 tennis team! 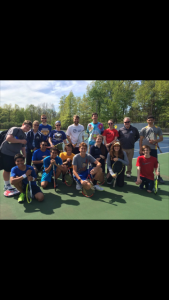