Sophomore Joe Bertrand was honored as Player of the Week from the Elyria Chronicle. Bertrand was seeded sixth in the Southwestern Conference tournament and upset third seeded A.J. Perez from Lakewood, 7-5, 1-6, 7-6 in the quarterfinals. That tough win was good enough for earning a medal in the championship round.

This season the two time letterman went 5-4 in SWC play, finishing over 500. in conference play for the first time in his career. This is no small feat in the highly competitive SWC, which is deep in talent at the second singles position.

Bertrand also enjoys golf during the fall sports season.  He is also a member of the marching band in the fall and the jazz band during the winter and spring. He made Eagle Scout this spring during the busy tennis season.

The Most Improved Player from the 2015 season, comes for a tennis playing family. His sister Lori ( class of 2012), Michelle ( 2014), and Jennifer (2016) all competed at the varsity level for Olmsted Falls.  He also works part time at the Renaissance Nursing home. His parents are Joe and Ellen Bertrand. 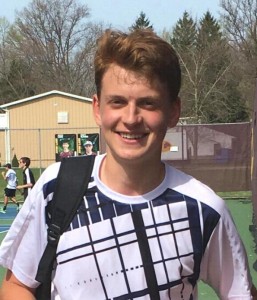 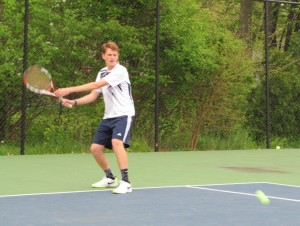